This talk consists of live lab exercises for the ClickHouse Developer Tutorial, Part 1. Please attend that talk and then join us for fun using ClickHouse. We have some puzzles for you to try that will test your ClickHouse knowledge. You can run all queries straight from your web browser, so there’s no preparation required. Join us for the fun! ∎ 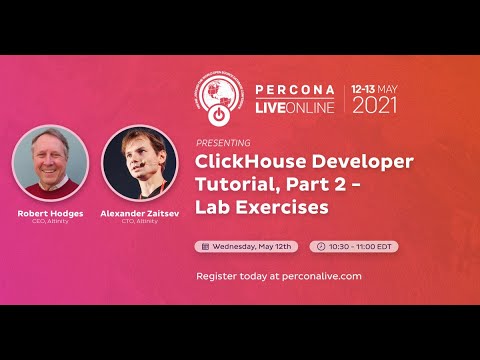 Robert Hodges has worked on database systems since 1983. During that he has loved, worked on, and occasionally despised 20 dierent DBMS types. His technical interests include data, distributed systems, virtualization technology, and security. He is currently CEO of Altinity, which supports and runs ClickHouse for enterprises.

See all talks by Robert Hodges »

Alexander is a co-founder of Altinity. He has 20 years of engineering and engineering management experience in several international companies. Alexander is an expert in high scale analytics systems design and implementation. He designed and deployed petabyte-scale data warehouses, including one of the earliest ClickHouse deployments outside of Yandex.

See all talks by Alexander Zaitsev »

When we talk about database security, it encompasses different modules of different distinct areas. It is a very vast topic because it requires securing your (1) Network, (2) Network Node, (3) Data, (4) Database, (5) Users and (6) Application.